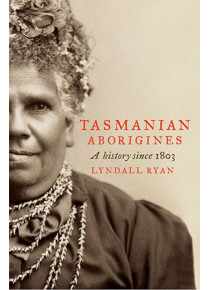 Tasmanian Aborigines A History since 1803 by L Ryan

The story of the Aboriginal people of Tasmania, from the arrival of the first whites to the present. While it contains much that is tragic, it is also a story of resilience and survival in the face of great odds.

'Lyndall Ryan's new account of the extraordinary and dramatic story of the Tasmanian Aborigines is told with passion and eloquence. It is a book that will inform and move anyone with an interest in Australian history.' - Professor Henry Reynolds, University of Tasmania

'A powerful and insightful historical account about a unique island and its First peoples, their dispossession and their struggle for survival and cultural birth right/heritage that reaches from the deep past to the present day.' - Patsy Cameron, Tasmanian Aboriginal author, cultural geographer and cultural practitioner

Tasmanian Aborigines were driven off their land so white settlers could produce fine wool for the English textile mills. By the time Truganini died in 1876, they were considered to be extinct. Yet like so many other claims about them, this was wrong.

Far from disappearing, the Tasmanian Aborigines actively resisted settler colonialism from the outset and have consistently campaigned for their rights and recognition as a distinct people through to the present.

Lyndall Ryan tells the story of the Aboriginal people of Tasmania, from before the arrival of the first whites to current political agendas. Tasmania has been the cradle of race relations in Australia, and their struggle for a place in their own country offers insights into the experiences of Aboriginal people nation-wide.