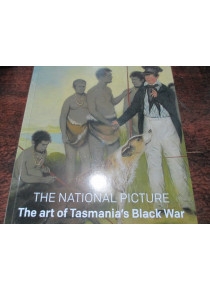 THE NATIONAL PICTURE The Art of Tasmania's Black War

Traces back to the times of Tasmania's Black War (1824-31) which was the most intense frontier conflict in Australia’s history.﻿
As Europeans settled in the Tasmanian country side, conflict interaction increased. Aboriginal attacks numbered 20 in 1824 but soared to 259 in 1830. During the war dozens of properties were torched, homes were plundered in the hundreds and thousands of sheep and cattle speared﻿. Even more devastating was the human toll, records for the colonists show 224 killed and 226 wounded.﻿

Back then, there were no cameras, so this book displays what art was available from those times depicting battles, people and lives.

This publication serves to conjure up and interrogate Tasmania's colonial past. Colonial representations of Tasmanian Aboriginal people are among the most remarkable and contentious expressions of Australian colonial art. The National Picture sheds new light on the under-examined figures in this difficult narrative: colonial artist Benjamin Duterrau, the controversial George Augustus Robinson and the Tasmanian Aboriginal people upon whose land the British settled.﻿