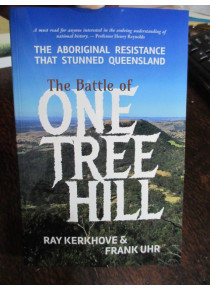 In 1840, Brisbane was the furthest outpost of settled Australia. On all sides, it was embedded in a richly Indigenous world. Over the next few years, mostly from across New South Wales northern plains, a large push of pastoralists poured into the Darling Downs, Lockyer and much of southern Queensland, establishing huge sheep stations. The violence that erupted welded many of the tribal groups into an alliance that, by 1842, was working to halt the advance.

The Battle of One Tree Hill tells the story of one of the most audacious stands against this migration. It concerns actions engineered by a father and son, Moppy and Multuggerah. In 1843, this culminated in an ingenious ambush and one of the first solid defeats of white settlement in Queensland.

The battle at Mount Table Top, 128 kilometres west of Brisbane,  near Toowoomba, astounded many at the time. The response was most likely the largest action of the frontier wars: the assembly of some 100 or more officers, soldiers, police and armed settlers – much of the region’s white settlement – drawn from hundreds of square kilometres. This force sought to drive out the warriors, but despite their best efforts, resistance not only persisted, but managed a few more victories. A fort had to be established to protect travellers, and brutal skirmishes, massacres, raids and robberies trickled on for decades.

The Battle of One Tree Hill introduces us to many of  the flamboyant characters, curious reversals of fortune and neglected incidents that together helped establish early Queensland. This narrative work combines decades of archival research, analysis, reconstruction and interviews conducted by historians Ray Kerkhove and Frank Uhr.