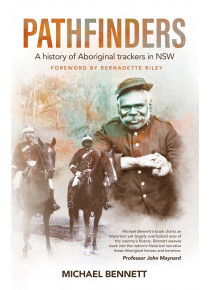 Pathfinders A history of Aboriginal trackers in NSW by M Bennett

History of Aboriginal Trackers in NSW﻿

There are few Aboriginal icons in White Australia history. From the explorer to the pioneer, the swagman to the drover’s wife, with a few bushrangers for good measure, Europeans play all the leading roles.

A rare exception is the redoubtable tracker. With skills passed down over millennia, trackers could trace the movements of people across vast swathes of country. Celebrated as saviours of lost children and disoriented adults, and finders of missing livestock, they were also cursed by robbers on the run. Trackers live in the collective memory as one of the few examples of Aboriginal people’s skills being sought after in colonial society.

In New South Wales alone, more than a thousand Aboriginal men and a smaller number of women toiled for authorities across the state after 1862. This book tells the often unlikely stories of trackers including Billy Bogan, Jimmy Governor, Tommy Gordon, Frank Williams and Alec Riley. ﻿