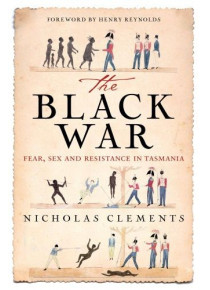 The Black War Fear, Sex and Resistance in Tasmania by N Clements

A history book about the Aboriginal Settler frontier conflicts which started soon after the arrival of the British into Van Dieman's Land or Tasmania.

Between 1825 and 1831 close to 200 Britons and 1000 Aborigines died violently in Tasmania's Black War. It was by far the most intense frontier conflict in Australia's history, yet many Australians know little about it.

The Black War takes a unique approach to this historic event, looking chiefly at the experiences and attitudes of those who took part in the conflict. ﻿A well researched book which unlocks the life and times of being a Tasmanian in the struggle against settlers. Crimes of slavery,
torture and sex trade are revealed.