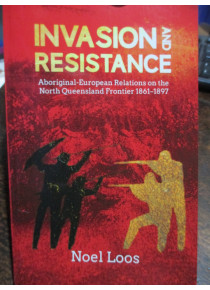 As the title of the book suggests, INVASION AND RESISTANCE﻿ of the North Queensland is the primary investigation by the author throughout the book.

By the late 1800's the settlers and the frontier conflicts had moved to more remote areas of Australia. North Queensland had become popular destination for colonisation﻿ especially after the discovery of gold. However, any economic resource was a cause of confrontation - ﻿
timber-getting in areas of the rainforest, pastoral industry, sea industries such as pearling and fishing.  There were many reasons for settler encroachment upon Aboriginal lands and food resources.﻿﻿

In all areas, despite sometimes armed resistance by the Aborigines, the Europeans imposed their authority. Many settlers were rough, the law could rarely be enforced, communication virtually did not exist. Cruel acts of slavery, sexual abuse and exploitation﻿ could go unnoticed and were endured by the aboriginals.