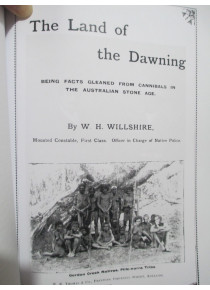 Dawning Among the Aborigines of Central Australia book

$59.00
The Dawning Among the Aborigines of Central Australia by W H Willshire

William Willshire (1852-1926) was a 19th century police constable in Central Australia. As the title alludes, he was present at the dawning of the aboriginal and white settlement around Alice Springs. Willshire took great personal interest in the aboriginals and wrote several books about the aboriginal tribes of the area. Importantly he was one of the first people to record the vocabulary and dialect of the Alice Spring natives - some of the important words shown in the book.