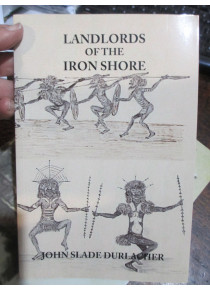 $27.00
Landlords of the Iron Shore by J S Durlacher

The author John Durlacher (1859-1918) was an early Pilbara pastoralist who developed a great interest in aboriginal customs. In 1900 he wrote his reminiscences of the culture and customs, together with a unique series of hand sketches. He produced the manuscript from his interactions and observations of the tribes around Roebourne and Cossack Western Australia. Also he reflects on his early family life around 1876 among the "civilised" Yamatji and Noondar people. Topics covered but not limited to are, cooking a kangaroo, corroboree, war songs, native dance, marriage laws, hunting with boomerang, spearing, cooking snake, death rites, wife beating, superstitions.

The book concludes  with a vocabulary list of aboriginal words and english meaning.