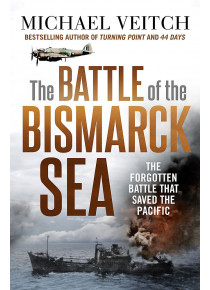 The Battle of the Bismarck Sea History Veitch

The Battle of the Bismarck Sea, fought over 2-4 March 1943, saw a combined force of Australian and American aircraft destroy a Japanese convoy of ships attempting to deliver nearly 7000 troops to the port of Lae in New Guinea

In the ensuing Battle of the Bismarck Sea, a force of land-based Australian and American planes attacked a massive convoy of Japanese warships. The odds were against them. But a devastating victory was won by the Allies and Japan's hopes of regaining the initiative in New Guinea destroyed. More importantly for Australians, the victory decisively removed any possibility that Australia might be invaded by Japanese forces. It was, for us, one of the most significant times in our history - a week when our future was profoundly in the balance.

2 March 1943 - RAAF No. 22 Squadron launches its Boston light bombers in raids against Lae.

3 March 1943 - RAAF No. 100 Squadron launches its Beaufort torpedo bombers to attack the convoy, but bad weather means only two aircraft can locate the ships, and their low-level torpedo runs are unsuccessful.  Beaufighter strike aircraft from No. 30 Squadron, which instead use cannons and machine guns to strafe the command bridges and anti-aircraft defences on the convoy. USAAF B-25 Mitchell and A-20 Boston bombers, along with B-17 bombers flying at higher altitude.

Bestselling author Michael Veitch (previous Turning Point) tells the riveting story of this crucial moment in history - how the bravery of young men and experienced fighters, renegades and rule-followers, overcame some of the darkest days of World War II.

13 other products in the same category: