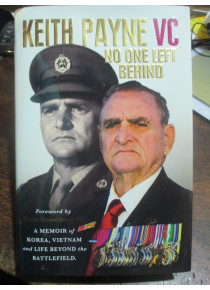 No One Left Behind Autobiography Keith Payne VC

Keith Payne VC served during the Korean War, Indonesia–Malaysia confrontation, Vietnam War and the Dhofar Rebellion (while Captain with the Army of the Sultan of Oman).

During the Vietnam War while serving with the AATTV (Australian Army Training Team Vietnam) he was awarded the Victoria Cross for gallantry. Later awarded the Medal of the Order of Australia (OAM) for his service to the veteran community in 2006.

Keith Payne's autobiography a great read about an Australian hero.

"This one has to be on your bookshelf ! "