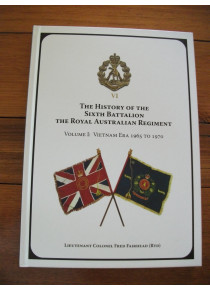 Operations and History of the 6RAR with emphasis on the two Vietnam tours undertaken by the Battalion and its Battle at Long Tan. The author, Fred Fairhead, was the 6RAR (2nd tour) Intelligence Officer and Company Commander.

Around 2000 men served with the 6 RAR in Vietnam in two arduous tours of duty in Vietnam.

The first tour of 6 RAR in 1966/67 is defined in Australian military history with the Battalion's courageous stand at the Battle of Long Tan and later Operation Bribie. The second Tour 1969/70 is remembered for the long duration of Operations , Lavarack, Mundingburra, Marsden and Townsville - all operations detailed in the book.

The book concludes with the Roll of Honour, 6RAR Honours and Awards, large index of names mentioned within the book.

The detailed narrative is supported with numerous photos and maps.