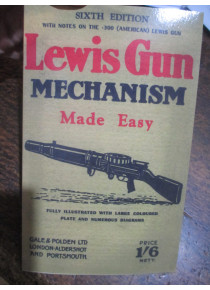 The US-made Lewis gun, with its distinctive circular ammunition drums, replaced the VIckers as the standard British Army machine gun in the First World War. This 1941 reprint of a manual first published in January 1919 shows that the versatile Lewis was still a popular and effective weapon twenty years later.

Written by a former Officer-Instructor at the Army’s School of Musketry at Hythe in Kent, the booklet describes the correct loading and unloading of the gun; the action of the firing mechanism; the magazine; the action of gases and the cooling system and notes on how to deal with jams and stoppages