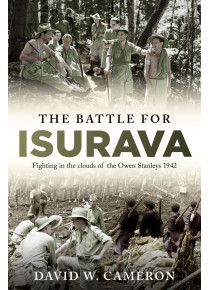 The Battle of Isurava is David Cameron's second book about the Australian Army's Kokoda Operations - click to see his first book The Battle for Kokoda Plateau.

Within 24 hours of the Japanese invasion of northern New Guinea at Gona in July 1942, the Australian militiamen of ‘B’ Company, 39th Battalion, spent four weeks fighting a delaying action against a crack Japanese force outnumbered by three to one. By mid-August, the rest of the battalion had arrived, and these men took up a position at Isurava, in the heart of the cloud covered mountains and jungles of the Owen Stanley Range.

At Isurava, this small militia force of the 39th Battalion now numbering around 300 men was determined to make a stand against a crack Japanese force of the 144th Regiment and supporting elements, numbering at least 1500. Then on the day the Japanese launched their attack, to the great relief of these militiamen, reinforcements from the 2nd AIF who had fought with great distinction in the Middle East began to arrive in the afternoon having spent days struggling up the track from Port Moresby. Even so, the Australians were still outnumbered, as the Japanese also received reinforcements, and unlike the Japanese, the Australians had no supporting artillery or medium machineguns.

The battle for Isurava would be the defining battle of the Kokoda Campaign and has rightfully been described as Australia’s Thermopylae. It was here that Australia’s first Victoria Cross in the Pacific war was awarded when the Japanese conducted several ferocious attacks against the Australian perimetre. Private Bruce Kingsbury led an Australian counterattack, rushing forward sweeping the Japanese positions with his Bren gun, saving he situation when all seemed lost — he was killed leading the charge. Another two men were also nominated for the VC during the fighting at Isurava.