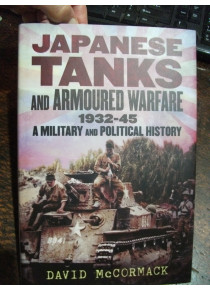 $39.00
Japanese Tanks and Armoured Warfare 1932-45 by D McCormack
The popular image of the Japanese tanks which faced the markedly superior tanks fielded by the Allies during the Second World War is one of poorly armed and armored Lilliputian tin cans which failed to make any impression upon the battlefield. In this absorbing new history, David McCormack looks beyond widely held and unchallenged misconceptions to create a new narrative in which Japan's rightful place as a leading innovator in tank design and doctrine is restored.

Why did Japan produce tanks in such limited numbers? What contribution did Japanese tanks make to the war effort? Why did it take Japan so long to develop heavier tanks capable of meeting the Allies on more equal terms? Drawing from primary and secondary sources, the author's meticulous research provides the reader with an objective appraisal of both the successes and failures of the Empire of the Sun's tank forces.