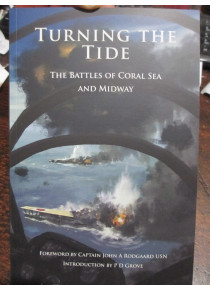 Turning The Tide Battles of Coral Sea and Midway

$35.00
Turning The Tide Battles of Coral Sea and Midway by J A Rodgaars USN

The outcome was the first decisive naval victory for the United States Navy with big-gun battleships further eclipsed by carrier aviation. Much of the action in the Pacific became legendary, as the British and American public viewed the newsreels of attacks at Pearl Harbor and the fall of Hong Kong, the Philippines and Singapore.
At Midway, Commander Joseph Rochefort, USN, and his team cracked a Japanese code, which revealed Admiral Yamato’s plan of attack on Midway Island. Japanese losses were vast and many Japanese airmen who had carried out the attacks at Pearl Harbor would meet their end at the Battle of Midway. Turning the Tide details these key events of the Pacific War and how the Battles of the Coral Sea and Midway allowed the US to be able to counter the Japanese at Guadalcanal.