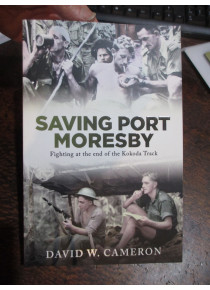 Saving Port Moresby Fighting at the end of the Kokoda Track

$32.00
Saving Port Moresby Fighting at the end of the Kokoda Track by David Cameron

After the battles for Deniki and Isurava, his troops were pushing south through the mountains. The Australians under Brigadier Arnold Potts, however, were not in rout, but were involved in a determined fighting withdraw. After fighting a delaying action at Templeton’s Crossing, the Australians took up a position along Mission Ridge, just south of Efogi Village. Horii and his battalions attacked and after two days of bloody hand-to-hand fighting, the Australians were forced to again withdraw. To the veterans who fought here the battle would become known as ‘Butcher’s Corner’.

After several further delaying actions, Potts and his men took up a position on Ioribaiwa Ridge, just 50-kilometres north of Port Moresby. His brigade by now numbered fewer than 300 men. Here they were reinforced with the men of the 25th Brigade. Horii decided that he would establish himself of Ioribaiwa Ridge as his base for operations against the township. After a week of fighting the Japanese cut through the centre right flank of the Australian 25th Brigade, forcing the Australians to fall back to Imita Ridge, the last defensible ridge in the Owen Stanleys immediately behind lay Port Moresby.

This book is part of  David Cameron's series of books about the Australian Battle of Kokoda.