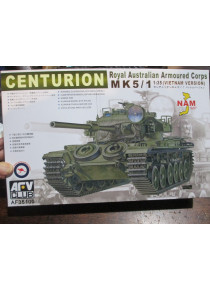 Australian Centurions of 'C' Squadron, 1st Armoured Regiment landed in South Vietnam on 24 February 1968, being headquartered at the Australian base at Nui Dat. During the war, 42 suffered battle damage with six beyond repair and two crewmen had been killed in action.

The model depicts the Centurion operated by RAAC.