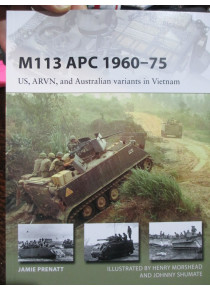 $29.00
M113 APC 1960 - 75: US, ARVN, and Australian variants in Vietnam by Osprey Books
An authoritative study of the world's most widely used armoured vehicle, and its key role in the Vietnam War. Appeals to all those interested in the technology of the Vietnam War, including modellers, wargamers, and armoured vehicle enthusiasts. The M113 APC played an important role in Australia's commitment to the Vietnam War and featured predominately during the Battle Of Long Tan.