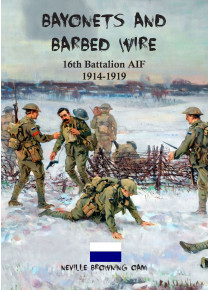 The 16th Battalion was originally raised in September 1914 as part of the all volunteer Australian Imperial Force (AIF), which was raised for overseas service during the First World War. Assigned to the 4th Brigade, the battalion drew the majority of its personnel from the state of Western Australia, while the remainder came from South Australia. After completing rudimentary training in Western Australia and South Australia followed by further basic training in Victoria, the battalion embarked for Egypt. Upon arrival, the 4th Brigade was assigned to the New Zealand and Australian Division, with whom it subsequently participated in the Gallipoli Campaign between April and December 1915.


After returning to Egypt, in early 1916 the AIF underwent a period of expansion and reorganisation, during which the 16th Battalion was split to provide an experienced cadre of personnel to the newly formed 48th Battalion. At the same time, the 4th Brigade was reassigned to the 4th Division and in mid-1916 the AIF's infantry divisions were transferred to Europe to take part in the fighting on the Western Front. For the next two-and-a-half years, the 16th Battalion was involved in several significant battles, including the Battle of Pozières, Battle of Mouquet Farm, Battle of Bullecourt, the German spring offensive, the Battle of Hamel and the Allied Hundred Days Offensive. During the war, the battalion's casualties amounted to 1,127 killed and 1,955 wounded.


Three of its members received the Victoria Cross for their actions: Martin O'Meara, Thomas Axford and Dominic McCarthy. Gallant 16th Battalion identities such as Percy Black and Harry Murray are well covered - the front cover illustration depicts the moment that Percy Black is hit by a bullet while crossing the second wire during the First Battle of Bullecourt in April 1917.