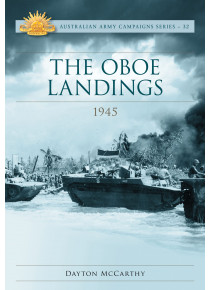 In mid-1945, the Australian 7th and 9th Divisions conducted three amphibious operations – code-named Oboe – on Borneo. The Allies enjoyed command of the sea and the air, and used both to isolate and pummel the Japanese defenders.

The Borneo landings – well planned, resourced and executed – are rightly considered the acme of amphibious operations, yet their strategic and operational utility has been questioned. By 1945, US forces had retaken the Philippines and were pressing towards Japan, while Australia was tasked with the conduct of these landings. Japan had yet to surrender and there was still fighting ahead, but Japan’s defeat was certain.

This book describes the planning and execution of the three landings: Oboe 1 on Tarakan, Oboe 6 on Brunei and Oboe 2 on Balikpapan. Although the political and strategic context is covered, this book focuses on operations and tactics, and demonstrates how the Oboe operations benefited from amphibious expertise developed in the Pacific theatre. As amphibious operations bring together land, naval and air assets to act in concert, amphibious expertise is joint in nature. This expertise comprised the development and use of specialist equipment, creation of fit-for-purpose command and control systems, joint and Allied interoperability and an overall amphibious mindset.