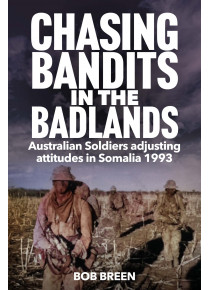 In January 1993, the Australian government sent just under one thousand young men and women to serve under American command in a violent, impoverished, starving society. Most males over the age of twelve either carried or had access to a gun, and most Somali men had been fighting a vicious civil war for years.
Australian soldiers and their teams had to gain control of the streets of Baidoa and surrounding towns. This contest was not ‘find, fight and kill’ warfare. There was no decisive victory or defeat. The aim was to detect ‘the bad boys’ and deter and de-escalate their violence, rather than escalate hostilities to success through ‘body count’. This mode of operation was not community policing by soldiers either. It involved adjusting attitudes forcefully and assuring uncomfortable consequences for bad behaviour and ultimately lethal responses to armed challenges.

The world looked over their shoulders. Corporals and diggers had to make split-second decisions to open or hold fire. Holding fire when provoked by punks constituted disciplined professional performance. Opening fire before understanding the situation, especially against unarmed provocateurs, constituted unprofessional conduct and possible condemnation, even criminal charges. These young Australians carried the international reputation of Australia and its army on their shoulders. Their actions would either enhance that reputation or create controversy, negative publicity and, potentially, international embarrassment and condemnation.