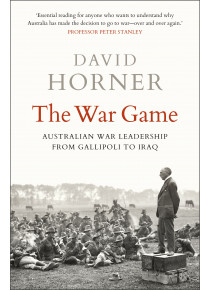 $45.00
WAR GAME by David Horner
He served as an infantry platoon commander in the Vietnam War and later, as a colonel, was head of the Australian Army's Land Warfare Studies Centre. He is the author or editor of 37 books on Australian military history, defence and intelligence, including The Spy Catchers, SAS Phantoms of War, Duty First, Blamey, and Battles that shaped Australia.

'Essential reading for anyone who wants to understand why Australia has made the decision to go to war - over and over again.' Professor Peter Stanley, UNSW Canberra

'The War Game is compelling. This is not a game.' Dr Brendan Nelson AO, President Boeing Australia, New Zealand and South Pacific

'A book of lessons for Australian political leaders on managing wars.' The Honourable Kim Beazley AC, Governor of Western Australia

Committing the nation to war is the gravest decision its leaders can make. The War Game examines why and how Australia went to war, and how it managed the nation's nine conflicts between the First World War and the Iraq War.