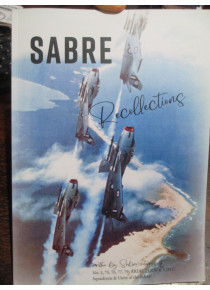 An icon of RAAF Jet Fighter service the Sabre. Stories of actual events, as experienced and portrayed by over 50 contributors—men of the RAAF Sabre squadrons and units.

The CAC Sabre, sometimes known as the Avon Sabre or CA-27, is an Australian variant of the North American Aviation F-86F Sabre fighter aircraft. The F-86F was redesigned and built by the Commonwealth Aircraft Corporation (CAC). Equipping five RAAF squadrons, the type saw action in the Malayan Emergency in the late 1950s, and was employed for air defence in Malaysia and Thailand in the 1960s. Ex-RAAF models also saw service with the Royal Malaysian Air Force and the Indonesian Air Force.

A special book, buy now so you don't regret missing out. The detailed narrative is supported by 257 Photographs.