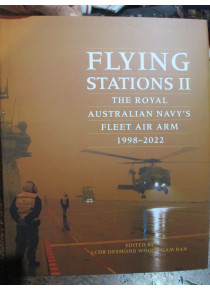 Flying Stations II is a chronology of the last quarter-century of Australian Fleet Air Arm activities and events from 1998 until 2022. Published to commemorate the 75th anniversary of the founding of the FAA on 3 July 1948, it follows the original 1998 volume of Flying Stations which chronicled the first 50 years of the FAA.

The period 1998-2022 saw much expansion and activity within the FAA, including the welcome return of large flight decks to the RAN in the form of the LHDs HMAS Canberra and Adelaide. A long-time FAA workhorse, the Sea King, was retired while new fleets of MRH-90 Taipans and MH-60R Seahawks were introduced. HMAS Albatross also welcomed ADF helicopter training operations with the Eurocopter EC-135T2+ which replaced the long-serving AS350B Squirrels.

The FAA also saw its share of challenges during this time. The ill-fated Seasprite acquisition resulted in a litany of failures before the program was cancelled in 2008. The crash of Sea King Shark 02 in Indonesia in 2005 was a traumatic event that saw the loss nine lives. The subsequent inquiry identified serious shortcomings in FAA maintenance and operational practices which subsequently led to much needed organisational and cultural change.

As a pointer to future directions, 822X Squadron was formed in 2018 as an Unmanned Aerial Vehicle development unit. The story of Australian naval aviation is a proud and unique one. Flying Stations II captures the activities and ethos of the many hard-working men and women continuing the tradition of the FAA to the present day.