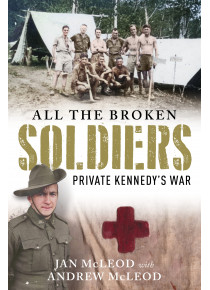 $32.00
All the Broken Soldiers Private Kennedy's War by Jan McLeod

Story of Private Lawrence Nicholas Kennedy was NX21854 who served WW2 with the 2/4th Australian Army Field Ambulance in Australia, the Middle East, the Kokoda Track and New Guinea during World War II.

Would be of interest to researchers wanting information about the life and times with any Australian Field Ambulance unit during World War Two.