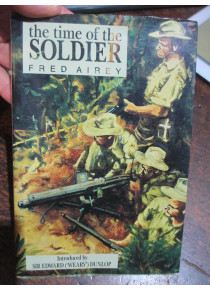 Fred Airey wrote this is autobiography (mostly of his war experiences) before his death in 1981, although it was not published in this book form until 1991. He had immigrated to Australia from England in 1920. After he had served with the British Army during the First World War. During this war, he was awarded the military medal for valour on the battlefield.

At the start of World War Two he enlisted with the Australian 2nd AIF and become Regimental Sergeant Major of the 2/4th Machine Gun Battalion. His book has good descriptions of his experiences prior and after the battle for and Fall of Singapore. He survived a mass execution, and made an escape from Singapore in a leaking child’s canoe. He was found in washed up in java and was brought to Sir Edward Dunlop for rehabilitation. Dunlop states that he was bloated with beri beri,starving, diseased and incoherent.

He became a member of ‘ Dunlop Force’ and functioned as a quartermaster during POW work on the Burma-Thailand railway.