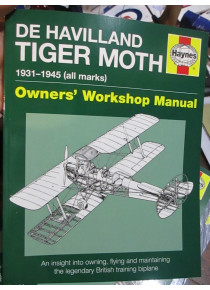 These books are not intended to actually carry out repairs, but they do provide the researcher with a unique understanding of the famous Tiger Moth.

The de Havilland DH.82 Tiger Moth is a 1930s British biplane designed by Geoffrey de Havilland and built by the de Havilland Aircraft Company. It was operated by the Royal Air Force (RAF) and other operators as a primary trainer aircraft. In addition to the type's principal use for ab initio training, the Second World War saw Tiger Moths operating in other capacities, including maritime surveillance and defensive anti-invasion preparations; some aircraft were even outfitted to function as armed light bombers.

The Tiger Moth is described from the views of the owner, the pilot and the aircraft technician. Color photos and technical drawings show the construction in detail.

de Havilland Australia assembled an initial batch of 20 aircraft from parts sent from the United Kingdom prior to embarking on their own major production campaign of the DH.82A, which resulted in a total of 1,070 Tiger Moths being constructed in Australia. In late 1940, the first Australian-assembled Tiger Moth conducted its first flight at Bankstown, Sydney. Most Australian aircraft were delivered to the Royal Australian Air Force (RAAF), but several batches were exported, including 18 for the USAAF and 41 for the Royal Indian Air Force.