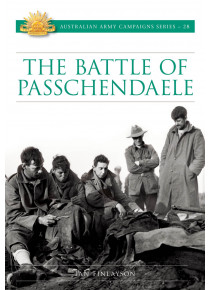 The Battle of Passchendaele by Ian Finlayson

The Battle of Passchendaele
Australian Army Campaign Series no 28

The Battle for Passchendaele on 12 October 1917 was one of the epic struggles of the First World War. British Field Marshal Douglas Haig allocated II ANZAC Corps to capture Passchendaele village, with Major General Monash’s 3rd Australian Division and the New Zealand Division leading the attack. For both divisions the battle was a bloody debacle.
Monash’s division started the battle with 5800 men and, just 24 hours later, could only muster 2600, suffering horrendous losses for a small territorial gain which was later relinquished.

The New Zealand Division was trapped in front of the German wire and barely moved from its start line, suffering one of its highest casualty rates of the war. Fought in conditions which seemed to preclude any chance of success, the battle has become a metaphor for pointless sacrifice.

After the battle the British and Australian leadership were unanimous in placing blame for the defeat on the all-pervasive mud. Monash, writing to his wife, believed that his plan ‘would have succeeded in normal conditions’.
Yet, two weeks later, in similar weather and terrain, Lieutenant General Currie’s Canadian Corps succeeded where Monash and Godley’s
II ANZAC Corps did not.

The central focus of this book is a detailed analysis of the 3rd Australian Division’s plan and execution of the attack on Passchendaele. By examining the differences between the Australian and Canadian plans for the capture of Passchendaele, the author casts this iconic battle in a completely different light.

A re-examination that is long overdue.