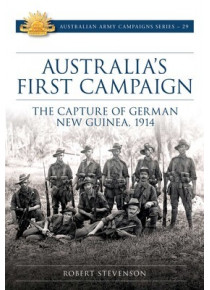 Australia's First Campaign The Capture of German New Guinea, 1914 No 29

The Australian campaign to seize German New Guinea in 1914 was one of the first military actions of the First World War, deploying from Sydney in August 1914. Preceding the Gallipoli landings by seven months, this remarkably successful amphibious operation was undertaken by the Australian Naval and Military Expeditionary Force (ANMEF). This book has excellent detail supported by maps and period photos.

The campaign was also everything the Gallipoli campaign was not: the New Guinea operations were planned and executed by Australian officers, the fighting was short, sharp and successful, and it was a highly effective use of military force, achieving its operational objectives at a remarkably low cost and serving Australian strategic interests in a direct and tangible way.

This volume of the Army History Unit’s Campaign Series describes how a novice navy and army planned, mounted and launched a complex joint operation over 3300 kilometres from their mounting base and defeated or forced the withdrawal of German naval and land forces posing a direct threat to Australia and New Zealand.

Australia’s First Campaign presents a fresh examination of the evidence from a range of participants, providing a thoroughly researched and readable account of the Australian military’s first joint operation. The volume is supported by more than 100 illustrations and includes a useful guide for those wishing to visit the battlefield today.

Further reading click to see the first book ever written about the ANMEF
Australia in Action New Guinea, 1914