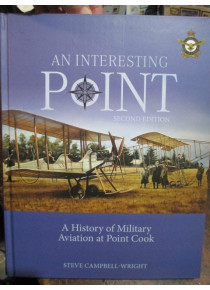 An Interesting Point: A History of Military Aviation at Point Cook 1914-2014
by S Campbell-Wright

A History of Point Cook RAAF Airbase is really a base History of the RAAF especially during the initial foundation years. Written during the Centenary year of the airbase which has been the location for a significant number of Australia's aviation 'firsts'.

This history abounds with personal RAAF stories not to forget that many of the country's top military and commercial pilots were trained at Point Cook.

A large book which has numerous illustrations of Point Cook, Aircraft and airmen.