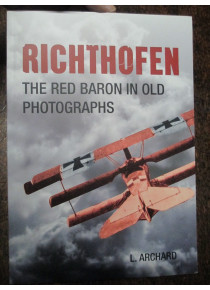 Richthofen: The Red Baron in Old Photographs by L. Archard

Manfred, Freiherr von Richthofen, was the top ace of the First World War, with eighty confirmed victories. He is also one of the most famous fighter pilots of all time.

A Prussian nobleman, he started the war as an officer in a Uhlan cavalry unit, serving on both the Eastern and Western fronts. In May 1915 he joined the flying service, initially as an observer then as a pilot, flying two-seaters. In August 1916, ace fighter pilot Oswald Boelcke recruited von Richthofen into a fighter squadron he was forming. He would later take command of Jasta 11, and then of Jagdgeschwader 1, the famous 'Flying Circus'. Manfred von Richthofen would be shot down and killed on 21 April 1918.