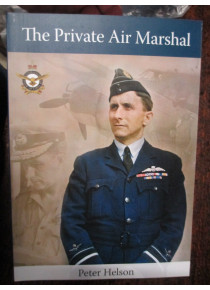 A Gallipoli veteran who became a decorated ‘ace’ of the Australian Flying Corps ... a controversial chief of the Royal Australian Air Force who was only the second Australian to fill this post, and enjoyed the longest continuous term of service ever ... the last chief of any Allied military service in World War II to pass from the scene. These are all elements from the life of Air Marshal Sir George Jones, whose career should have long ago inspired serious historical examination and assessment. This is the book which finally undertakes the task.
Jones’ tenure of the RAAF’s top job was a saga unique in the annals of the Air Force. Plucked from obscurity to succeed a British four-star officer in mid-1942, he was an Air Vice-Marshal at a time when the heads of the other Services were all two grades higher. He oversaw a doubling in the size of the RAAF which made it the world’s fourth largest air force by the war’s end, yet he was not promoted to Air Marshal until 1948, and not knighted until a year after he retired.
Dr Peter Helson’s account of Jones’ performance as RAAF Chief of the Air Staff critically examines his wartime feud with his senior operational commander, Air Vice-Marshal Bostock, which split the loyalties of Air Force members and soured relations with senior Allied military figures, the other Australian Services and the national political leadership alike. The issue of divided command epitomised by this momentous rift is just as relevant today as it was during World War II.
Although Jones left a personal memoir, published a few years before his death at age 95 under the title From Private to Air Marshal, his slender offering provided little insight into the private man. This is the shortcoming that Dr Helson directly addresses in this book, by seeking to highlight the elements of his background, personality and character which provide the context against which to assess Jones’ record as a commander.