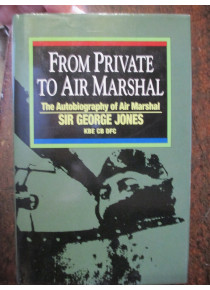 From Private To Air Marshall autobiography by George Jones

From Private to Air Marshall the autobiography of Air Marshall Sir George Jones KBE CB DFC.﻿
This is George Jones personal story of his long association with RAAF. From his early days of service with the infant No 4 Squadron﻿ Australian Flying Corps, flying Sopwith Camels and Snipes into the dogfights of World War I. He was to fly 150 patrols and become an Ace fighter pilot. He was badly injured by a bullet wound and petrol burns in combat with a German fighter in March 1918.﻿

It was a remarkable career in which he rose through 15 ranks to become Chief of Air Staff in 1942, a position that he held for 10 years. He was instrumental in the building up and nurturing the RAAF forces from a meager 12 squadrons in 1942 to an effective fighting force.

As an honor, he was present at the Japanese surrender, and presided over the organisation of the postwar RAAF including the Allied occupational forces in Japan, the Berlin airlift, and the Korean War. He was the first man ever to rise from the rank of private to the position of Chief of Air Staff.

A military career that started as early as July 1915, Private George Jones, aged just 18 set sail for Gallipoli with the 9th Light Horse Regiment.﻿ He retired from the RAAF in 1952. Wrote this autobiography book which was first published in 1988.﻿ He died in 1992 aged 95.﻿