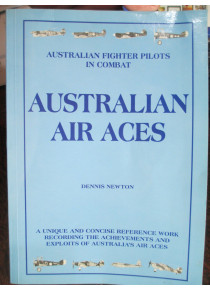 A unique and concise reference work recording the achievements and exploits of Australian Air Aces. Both the Australian Air Aces of WW1 and WW2 are documented in this book and included whether the Australian was in the AFC RFC RAF or RAAF. The combat biography shows the Name, Unit, summary history of the pilot, interesting facts, aircraft kill log if available, drawings or photographs of aircraft where available, group photographs of airmen of Squadron, action period photos.
There is a larger bio of an ace whereby they become famous during or after the war: Robert Little, Ross Smith, Rod Dallas, Bluey Truscott, Clive Caldwell etc.
Due to its ready reference nature (written in order of War and then alpha of surname) this book has become sought after.