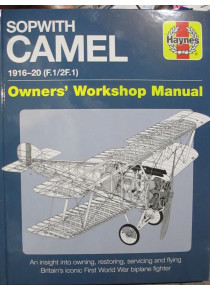 Think of the First World War and then think of an aircraft. What springs to mind will probably be the Sopwith Camel. The single-seat Camel was one of the most successful ‘scouts’ (the period term for a fighter) of the First World War. Jarrod Cotter has been given rare access to the Shuttleworth Collection’s Sopwith Camel replica as well as Camel new-builds in France and New Zealand. The manual includes rare historical data and photos. Colour photography of rebuilding, restoring and flying this classic WW1 fighter.
These books are not intended to actually carry out repairs, but they do provide the researcher with a unique understanding of the Air Force technology available over 100 years.

The SOPWITH CAMEL is described from the views of the owner, the pilot and the aircraft technician. Color photos and technical drawings show the construction in detail.


The Sopwith Camel was a British First World War single-seat biplane, fighter aircraft introduced on the Western Front in 1917. The aircraft was developed by the Sopwith Aviation Company as a successor to the earlier Sopwith Pup and became one of the most iconic fighter aircraft of World War I.

The Camel was powered by a single rotary engine and was armed with twin synchronized machine guns. Though difficult to handle, it’s high level of maneuverability to an experienced pilot was highly valued in its role as a fighter aircraft.

In total, Camel pilots were credited with shooting down 1 294 enemy aircraft, more than any other Allied fighter of the conflict.

Towards the end of World War I, the Sopwith Camel was also used as a ground-attack aircraft, partially due to it having become increasingly outclassed as the capabilities of fighter aircraft on both sides were rapidly advancing at that time.

Of the eight Australian Flying Corps squadrons formed during World War I, Nos. 1, 2, 3, 4, and 6 Squadrons are still operational within the Royal Australian Air Force.