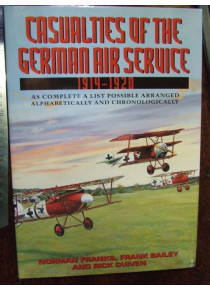 Casualties of the German Air Service 1914- 1920 ' book by Franks Bailey and Duiven. A list of German aviation casulties was first published in 1932 by von Eberhardt and this gave the vast majority of known losses of all kinds suffered by German Air Force. In this book all deaths are listed, whatever the cause, be it operation, training flight, illness especially the world wide influenza epidemic. The date and place of birth of ech airman is given together with his place of death, first name and rank. Zeppelin casualites are noted separately. Magnificent for its detail and a credit to the research team and compilers.
Must have for any German WW1 medal collector or genealogy researcher - family history .