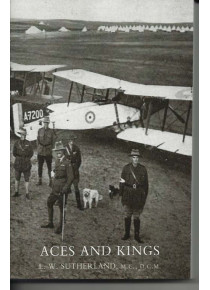 ' Aces and Kings ' by L.W. Sutherland MC DCM . Sutherland
joined the AIF not long after the start of the war in August 1914. He was born and bred in Victoria where he was a Carpenter. In the AIF he become a Signaller Trooper with the Australian Lighthorse.
He served on Gallipoli. Whilst with the Light Horse he was awarded the DCM (31/8/1916) and Mentioned in Despatches(1/10/1916).

He was then promoted Lieutenant and soon after 14/8/1917 transferred to the AFC as a Flying Officer Observer. Sutherland was a Pilot with No. 1 Squadron of the Australian Flying Corps AFC . Flying various aircraft like Nieuport Scouts Bristol Freighter SE5s and RE8s.

While with the AFC he was awarded the Military Cross during August 1918.

A detailed text supported by illustrations gives excellent
account of daily life of a member of the Australian Flying Corps .

He also flew Lawrence of Arabia supporters and has written a chapter on Lawrence. A valuable reference for genealogy research for any family members that served in Australian Flying Corps.

Written by one who was there!