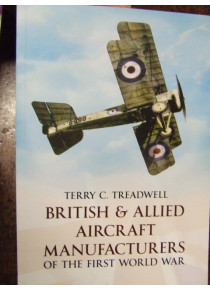 At the start of the First World War, little thought had been given to how aircraft would play a part in the conflict. The Royal Flying Corps consisted of five squadrons, one equipped with observation balloons and the others with aircraft.

In fact, so advanced was Britain that its squadrons were the first in the world. Along with the Royal Flying Corps, Britain also had the Royal Naval Air Service, which pioneered the use of aircraft carriers. The value of aircraft was soon realised and rapid expansion took place of both services, each using a variety of aircraft from Sopwith Pups and Camels, to Bristol F.2Bs and the huge Handley page O/400 bombers, as well as Vickers Vimys, Martinsyde G.100s and Avro 504s.

With a wide range of aircraft of all types, from fighters to bombers, seaplanes and reconnaissance types, the British air forces started the war with barely 150 aircraft but ended it with thousands. Terry Treadwell takes us through the various types, their uses and history, and this companion to his German and Austro-Hungarian Aircraft Manufacturers is profusely illustrated with images of the men and machines that protected the skies of the Allied territories.﻿