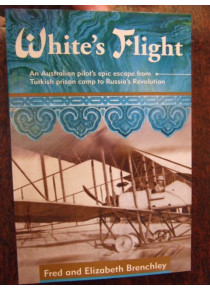 One of the most incredible adventures of WWI: an Australian airman (Captain Thomas Walter White) captured in Iraq is force-marched across the Middle East to a POW camp in Turkey, only to escape to Russia as a stowaway on a Bolshevik smuggler's ship, where he arrives in the maelstrom of the Russian revolution. The authors capture wonderfully the adventure of White's flight and have written a fascinating account of one of Australia's forgotten war heroes.﻿