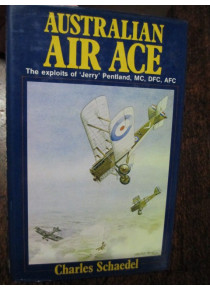 Australian Air Ace : The Exploits of Jerry Pentland MC, DFC , AFC , By C Schaedel. Pentland was an Australian leading air ace. After service with the Light Horse he was transferred to the RAF. He was a natural pilot he had 24 German 'kills'. After the war he remained in service with the RAAF. He become a private charter pilot in New Guinea. Due to his experience, at the start of WW2 he was targeted by the RAAF as an instructor.