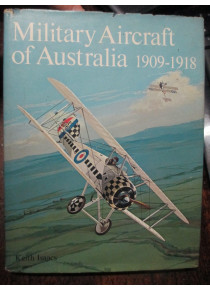 1971 War Book' MILITARY AIRCRAFT OF AUSTRALIA 1909-1918 '   by ISAACS, Keith..
Australian War Memorial. Canberra 1971 First Edition. Exacting
text detail & illustrations of each type of aircraft used by the Australian
forces and representative enemy aircraft. The first complete account of the history of military aviation in Australia, volume one in a series of four, over forty different types of aircraft were used by the AFC and the history of each is presented in a narrative which contains a
brief summary of the aircraft's design, its development and operational background.