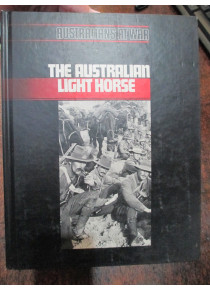 ' The Australia Light Horse ' by Ian Jones.
Published by Time Life books. These Time Life series Australian World War One history Books have become well known for their excellent illustrations and well written text. This volume lives up to this reputation as there are many outstanding high definition printed photographs. Starts with the history of the Mounted Bushman units in The Boer War . Has some great printed photos of the Bushman units - extremely clear.

Of course 95 % of the book relates to The Australian Lighthorse history in World War One. There is no reference past WW1. The pictures are accompanied by an excellent high detail text of the History in Chronological order. Written by Ian jones a noted local Lighthorse historian and screen play writer. Battles covered are Anzac , Defence of Anzac , Suvla , Sari Bair , Gallipoli 1915 , Rumani , Magdhaba-Rafah , Egypt 1915-17, Gaza-Beersheba , El Mughar , Nebi Samwil , Jerusalem , Jaffa , Jericho , Jordan (Es Salt) , Jordan (Amman) , Megiddo , Nablus , Palestine 1917-18 . The Famous Light Horse emu plume was first used in 1891. The plume was adopted by the Queensland Mounted Infantry as a Battle Honour for their work in the western shearers strike of that same year. The plume was used by the unit in the Boer War and was by World War One used by all Light Horse units as it is to this day. The plume become known as the " Kangaroo Feathers ' . The Arabs in the war referred to the Light Horse as the King of the Feathers .