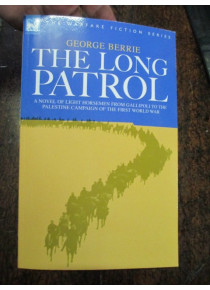 The Long Patrol by George Berrie.

The author George L. Berrie  was a member of the Australian 6th Light Horse Regiment  he also wrote the Official History of the 6th ALH under the title 'Under Furred Hats' in 1919. This book was first published in 1949 under the title ‘Morale'. The original book is rare.

Berrie joined the 2nd Reinforcements of the Regiment on 19th January 1915 as a Trooper number 724. He was a 33 year old grazier from Moree, he was promoted through the ranks and was commissioned on the 9th March 1918. He was present with the regiment at Gallipoli being evacuated with debility on the 19th August 1915. He remained with the Regiment the rest of WW1.
Although a fictionalised account, it is based on the Author’s true experiences and campaigns with the 6th ALH.   The book provides the reader with an authentic record of warfare in the trenches of Gallipoli and then following on with the Lighthorsemen during the last great campaign in history of mounted contingents through Palestine, Sinai and onwards to Syria .

The book would be very interesting to any family historian researching life and times of the Australian Light Horse in particular 6th Alh – great read!