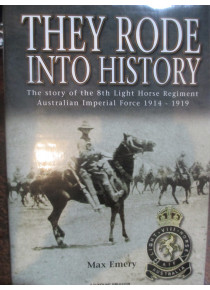 This military book is a Unit history of 8th Light Horse Regiment, written by Max Emery, whose great uncle was killed with the Regiment at Es Salt in Palestine. This unit was raised in Victoria and saw service in Egypt, Gallipoli, Palestine and Syria during the Great War.

The action of the 8th and 10th Lighthorse Regiments during the ill fated charge at The Nek on 7th August 1915 became legendary after the Charge was  immortalised on screen in the famous Australian movie called ' Gallipoli ' starring Mel Gibson.

During the Gallipoli campaign, the ranks of the 8th LHR were devastated with over 180 officers and men killed. After the unit returned to Egypt in December 1915 they were reunited with their horses and for the next three years participated in campaigns which took them across Egypt and into places such as Gaza, Beersheba and many famous battles. In early 1919, after WWI during the Egyptian uprising, units of the 3rd Light Horse Brigade including the 8th LHR spent some months assisting the British authorities to crush the rebellion.

This Regiment's history has never been told in its entirety before. THEY RODE INTO HISTORY is a classic record of heroism of the Lighthorsemen and their horses under terrible conditions in Egypt and Palestine.

The book is well supported by rare photos and maps, and also includes Nominal, Honour and Gallantry Medal Rolls.