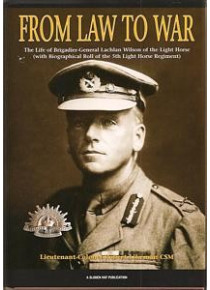 $75.00
FROM LAW TO WAR:
The life of Brigadier Lachlan Wilson of the 5th Light Horse
(with Biographical Nominal Roll)  By R. Likeman﻿

Described as 'the least known distinguished man in Queensland', General Lachlan Wilson, a leading Queensland lawyer, also served in the Queensland Mounted Infantry in the Boer War and commanded the 5th Light Horse Regiment at Gallipoli and back in the Middle East until being promoted to command the 3rd Light Horse Brigade in 1917.

The controversy as to whether the Australians or 'Lawrence of Arabia' first entered Damascus in 1918 is finally resolved in this military book. Interestly also covered in the book is the 1929 Inquiry into the accidents involving Sir Kingsford Smith's Southern Cross aitcraft. This inquiry was chaired by Wilson.

A detailed 125pp with biographical nominal roll of the 5th LHR from 1914-18 is also included.
Click to see the 5th Light Horse Museum Gympie