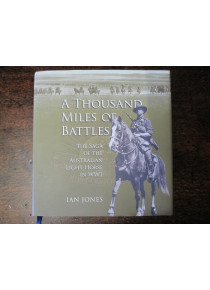 A Thousand Miles of Battles - The Saga of the Australian Light Horse in WW1 by I. Jones

This is a revised and enlarged volume of a book by Ian Jones published by Time Life back in 1987. Many new private collection photographs and information have been included. Real buckram cloth hardcover adorned with gold titles .

One such addition is the letter by the Trooper who actually took the photograph of the Charge at Beersheba. This photo has long been debated as being fake or staged many years later - have a read of the Trooper E.E. Elliott letter from book shown above.