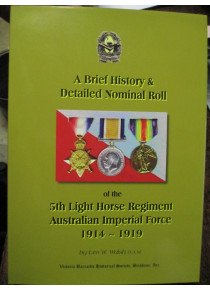 In 1993, some personal property and documents of Colonel Sir Donald Cameron KCMG DSO VD were acquired by the Victoria Barracks Historical Society. Colonel Sir Donald Cameron served on Gallipoli with the 5th Australian Light Horse and went on to command the Regiment.  Among the documents was a book, in Sir Donald’s handwriting, listing the names of all the personnel of the Regiment and also B Squadron, 11th Australian Light Horse Regiment AIF, which served under the command of the 5th Australian Light Horse Regiment during the Gallipoli campaign. It detailed incidents involving those members that were killed, died of wounds or disease, wounded, evacuated wounded or sick, returned to Anzac, promotions, etc. a considerable number of original, handwritten recommendations for awards and distinctions, and some original messages were also included, and the majority of unique photographs used within the book came from Sir Donald’s collection.

This book was commenced in 1999 as a record of the Nominal Rolls of the original 1914, 5th Light Horse Regiment members. As research and documentation progressed it was decided that all the 30 reinforcement groups of the Regiment during the Great War needed to be included.

The brief history of the Australian Light Horse Regiment included in the book encompasses some 60 pages. It comprises chapters on the raising of the Regiment, action at Anzac between May and December 1915, the Sinai, Romani in July 1916, Katia in August, then Gaza in March and April 1917, and Beersheba in October 1917.
The detailed Nominal Roll of members accounts for 177 pages.
The book has been printed on quality antiaging paper and has been hard cased with a dust jacket.

It is indeed a nice presentation book for family keepsake.