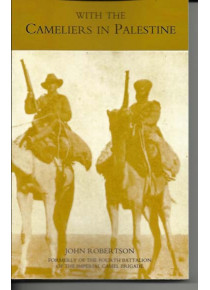 With the Cameliers in Palestine Camel Corps

With the Cameliers in Palestine ' by J. Robertson .﻿ new book

With the Cameliers in Palestine ' by J. Robertson .
The Imperial Camel Corps were made up with British, Australian, NewZealand and Indian Troopers. Robertson, a New Zealand, was member of the 16th Camel Company, 4th Battalion, Imperial Camel Brigade (or Imperial Camel Corps as it was generally interesting account of the Camel Corps actions - attacks on the border line between Sinai and Palestine, the Battles of Gaza and ultimately its capture and that of Beersheba. But he also includes an account of the everyday experiences   of the Cameliers. Nor does he forget the camel itself as he describes the beast, standards of the 1930s. The Imperial Camel Corps, a cosmopolitan body of troops that gradually grew into a brigade some two thousand eight hundred strong. It was organized in companies of six officers and 169 other ranks, four companies to a battalion.

By December 1916 four battalions were in existence which were combined to form a brigade with the necessary support units such as a machine-gun squadron, artillery,engineers, signals, field ambulance, army service corps detachment and a brigade ammunition column, in fact very much the organization of an independent cavalry brigade. The 1st and 3rd Battalions were recruited from the Australian Light Horse, the 2nd Battalion from British Yeomanry units, and the 4th Battalion from the Australian and New Zealand Light Horse (two companies from each). The artillery element was a mountain battery of the Hong Kong and Singapore R.G.A., manned by Sikhs. There were well over 3,000 camels which, if following each other head to tail would have made a column eight miles long. There were no wheeled vehicles in the brigade.

The book was first published in 1938. The book being offered is a professionally produced reprint of that history. It is a true reproduction of the 1938 edition. Of course the original copy of this history is rare and expensive. Even these reprints escalate in value when they in turn become out of print. Since 1938......Great for Camel Corps medal or genealogy research ! Don't miss this one﻿