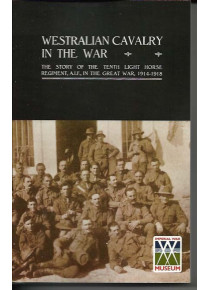 WESTRALIAN CAVALRY IN THE WAR. The Story Of The Tenth﻿ by A C N Olden DSO
New book reprint of original

WESTRALIAN CAVALRY IN THE WAR. The Story Of The Tenth
Light Horse Regiment, A.I.F., In The Great War' by Lieut-Col A.C.N.Olden D.S.O..
The author was the last C.O. of the regiment. The Regiment’s most famous actions
were the charge at the Nek on 7 August 1915, and Hill 60 on 29–30 August. Probably
The Nek is the most well known battle scene of the whole AIF thanks to the Peter
Weir ’s Gallipoli film starring Mel Gibson. This History was compiled and written
by Olden in 1918-19. The History first being published in 1919. This book being
offered is a professionally produced reprint
of that history. It is a true reproduction of the 1919 1st edition. Even these
reprints escalate in value when they become out of print. Here is your chance
to obtain this book that can be treasured as a hand me down Family History Book.
Follows the 10th ALH history from its formation in Perth through to it being
disbanded in 1920 after the Egyptian uprising of 1919. In between there are
340 pages of information about the men and times that made up the famous 10th.
A well written detailed text, rather large, with Illustrations detailed maps.
A roll of Honour and Honours & Awards appendix complete this book.<br>
A prime source for genealogists and military historians.
10th Light Horse medal or genealogy research !﻿

A little more for diehards....

10th Australian Light Horse Regiment
AIF was the only AIF light horse regiment recruited in Western Australia during
the First World War. The regiment was raised in October 1914 when it became
apparent that Western Australia could provide more than a single squadron of
mounted soldiers. The regiment joined the 3rd Light Horse Brigade in Egypt and
served dismounted at Gallipoli. The regiment’s most famous actions were the
charge at the Nek on 7 August 1915, and Hill 60 on 29–30 August. It was in this
last action that Lieutenant V.H. “Hu” Throssell performed the valorous deeds
for which he was awarded the Victoria Cross. He was the only Australian light
horseman to be so decorated during the Great War. After the withdrawal from
Gallipoli in December 1915 the regiment was bought up to strength and reorganised.
With the rest of the Australian light horse they defended Egypt from the Ottoman
Army advancing on the Suez Canal. Through 1916 they drove the Turks across the
deserts of Sinai, participating in the battles of Romani and Magdhaba. In 1917
they were part of the Desert Column that advanced into Palestine. The regiment
participated in the bloody battles to break the Gaza–Beersheba line and helped
capture Jerusalem. They participated in the Es Salt Raid in May 1918. In August
they were one of the regiments re-equipped with swords and rifle boots, and
retrained to take a more orthodox cavalry role. In their new role they took
part in the rout of the Ottoman army in the Jordan Valley, a campaign the light
horse referred to as “The Great Ride”. In September the 10th was the first formed
regiment to enter Damascus. Turkey surrendered on 30 October 1918. After the
end of the war, elements of the regiment saw action in putting down the Egyptian
uprising of 1919. They were finally disbanded in 1920. ﻿