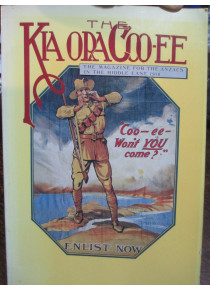 The Kia Ora Coo-ee ' edited by D Kent .
This book brings together in one document the printed copies of the famous Light Horse newspaper/journal called the 'The Kia Ora Coo-ee'. These Light Horse newspapers were printed on the day right there on the Battle front. So they take the reader on a journey with the men of the Light Horse - providing valuable life and times information. The Kia Ora Coo-ee was one of the most popular and longest in print Australian World War One service journals. It appeared monthly between March and December 1918. It was printed in Egypt and was distributed mainly to the Lighthorse and support units in the Middle East. Thus it is a remarkable record of the life and times of the Australian Lighthorse , Remounts Camel Corps. This is a wonderful medal research book as there are numerous named individuals
AIF Members in every issue... get a load of the great of the frontespiece on the 15th June 1918 issue - what a beauty. This book will really show you what
it was like to be there!
Guaranteed 100% Australian Digger Lighthorsemen Middle East content.